So...let us rewind just a bit...to the Summer of 1962...In an elevator inside an office building in Beverly Hills, California, where staff and patrons are riding the floors down to the lobby.

A woman in the elevator (my mother) speaks out loud asking if anyone knows a "7 letter word for _____"...and a voice in the back of the elevator answers quickly. She asks another question...and again...the same voice answers with another word that fits.  That voice in the rear of the elevator eventually becomes my dad...Chauncey Holt... 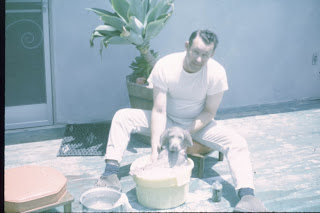 As the story goes, my mother wanted to solve a crossword puzzle listed in one of the major newspapers and win the big prize.  There in the elevator she was getting her first set of answers.  As the doors opened and the people parted out the doors...here comes my dad, Chauncey Marvin Holt, a very handsome fellow, obviously intelligent and with a smile that warmed your heart.  With one fast swoop my mother grabbed his hand and said "You are taking me to lunch."  Very brazen in those days!

My father couldn't resist her charm and enjoyed her style and flare.  He always complimented the fact that she had a spunk and intellect that was captivating.  So, he gave little resistance and happily shared a meal and the crossword puzzle.  While their attraction grew, my father asked if she would like to accompany him on his airplane the following day.  She too gave little resistance and would happily share a ride on a plane with a handsome pilot.

In the early hours of the morning, 4 o'clock mind you, a knock at my mother's door was heard.  Covered in face cream and wearing her hair curlers she approached the door to find my father standing at it.  Her curiosity had her and she asked why he was there.  "For our date", he replied.  My mother thought he was crazy...4 o'clock means cocktails...then dinner...but I guess my father had a better surprise in mind.  She freshened up and they rode out to Goleta Airport in California.

He flew my mother into the Grand Canyon for the sunrise and then on up to Vale, Colorado for breakfast.  My mother described the date as perfect.  Like a fairy tale.  My father was charming and really left an impression on her.  Afterwards, they spent the evening around the pool getting to know one another and what their aspirations were and playing chess.

My mother was a fantastic chess player and learned from a very skilled player and Ambassador to Belgian.  The game of chess, to my father, was not just a game but the game of life.  He too was highly skilled...but my mother would beat him.  This was a real shocker and attraction for my dad!  While they kept playing and learning about one another he attempted to learn and adapt to her ease of play and strategy.  Yet, he rarely would win.  She just kept on beating him.  This was the ticket and a perfect match to be and become.

At the time, my mother worked for an insurance broker and my father, well... he simply "worked for the government" and left it at that.  My mother, having a high ranking brother in the military, understood and respected that there was a level of privacy that came along with the military.  She embraced it and enjoyed getting to know the other chapters of his life.....

but what she didn't know is she "Don't Know Jack"...at least not yet!
Posted by The Daughter of Chauncey Marvin Holt at 10:46 PM